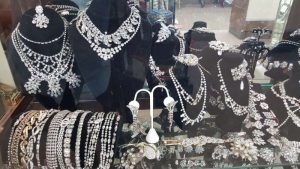 Vintage jewelry is classified into many categories.  Costume jewelry is an form of vintage jewelry.  It has been popular for over 250 years.  Consumers wanted inexpensive jewelry to go with their clothes and costumes.  At first jewelers used glass instead of precious stones in the 18th century.   Then jewelers switched to semi precious materials in the 19th century.   As a result consumers could now wear expensive looking jewelry.  At this time mass production made it popular.   Rather than accept the mass produced method, some designers wanted to add creativity to the process.  As a result the jewelry became more ornate and extravagant.  Costume jewelry remains  popular today, and is categorized by the time period it was made.

The Art-Deco period started in the 1920’s.  Jewelry designed then had geometric, and symmetrical shapes instead of long sweeping lines.  Different designers used this method for many different accessories. Consequently the Great Depression put an end to this period.  The Retro period was next.  It started in the mid 1930’s and lasted thru 1950.  Costume Jewelry in this time frame was mainly American with Europe at war.  Natural materials began to be used.  Moonstones and Bakelite became popular at this time.   The  Art Modern period overlapped the retro period.  It started in 1945, and ran thru the early 1960’s.  Several distinct styles became popular at this time.  People favored bold fancy jewelry along with citrines, jade, opal, and topaz.  Poodle Pins and Christmas pins also became sought after.

Costume jewelry is considered collectible.  Designer stamped pieces are most desirable. Weiss, Chanel, Eisenberg, Dior, and Crown Trifari are a few of the most sought after.  The Colorado Antique Gallery has a fine selection of costume jewelry from many different time periods.  When you come to the store ask the front counter to point you in the right direction.

If you are interested in becoming one of our antique vendors, then fill out our quick Booth and Case Rental application and we’ll be in touch with you pronto.

Join Our Email List To Find Out About Our Sales and Special Events.

See Inside the Store!

Do a virtual tour of the inside of the store by clicking around and through the aisles! 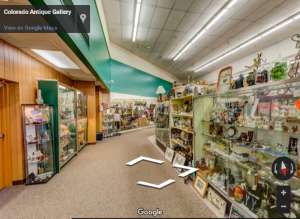 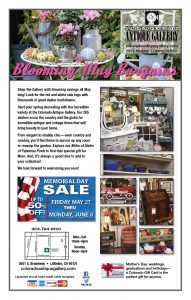 See a photo gallery of our current featured products and the dealer booths in which you’ll find them. 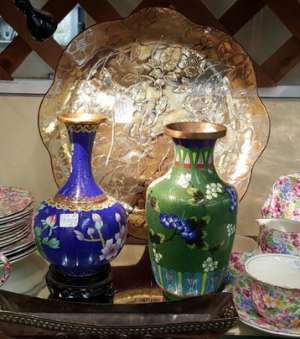 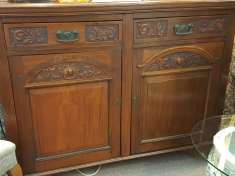 A “statement piece” could be all you need to perfect your room design… a secretary desk, bedroom dresser, an ornate chair, mirror or table… adding a one of a kind conversation piece adds panache to any room. See more… 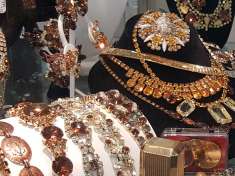 That stunning and sparkling piece of vintage or estate jewelry for her is always a joy to discover…as is a vintage pocket or wrist watch for him. Weiss, Eisenburg, Hollycraft, Cramer of New York…Rolex, Omega, Hamilton , Accutron. See more… 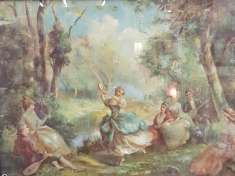 The Decorative Arts have been “eye candy” to the cognoscente for centuries. Porcelain, china, silver, objets d’artes… Asian decorables. The quality and quantity will astound you! See more... 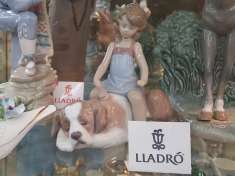 The resurgence of antiquing and collecting in America has hit a high. Shows such as “American Pickers”, ”Antiques Roadshow”, and others have brought a new visibility to collecting. Elegant to “Elvis”, Military to Music memorabilia…the list goes on and on, as our 285 dealers have something for every collector. See more…